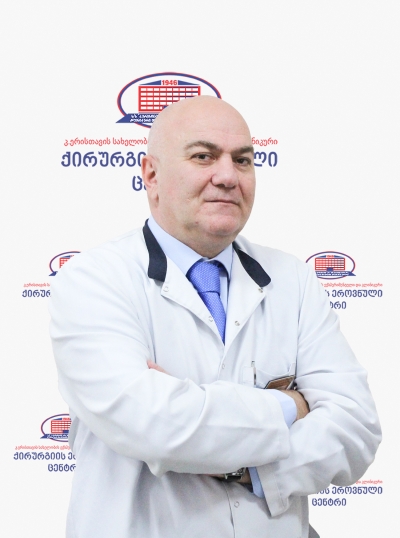 Orthopedic Surgeon, a head of the Department of Traumatology of the National Center of Surgery.

From 2000 to the present day - the Central University Clinic named after Academician N. Kipshidze, orthopedic surgeon;

2011–2012 Tbilisi #5 Clinical Hospital, a head of the Traumatology and Orthopedic Surgery department;

2003 Baden-Württemberg clinic, Staufen, Germany, the endoprosthesis  of the hip, shoulder, knee, residency (with the permission to work);

The 2010 Year Tuttlingen, Germany, internships with the help of an " aesculap" endoprosthesis of the knee and hip joint using a navigation system.

From 2001 Is engaged in teaching students, leads a course of the Traumatology and orthopedics for English-speaking students in the central university clinics of the Tbilisi State Medical University.

Extremely complicated operative intervention in traumatology – How did doctors save a patient injured in a car accident?

One more extremely complicated operative intervention was conducted in the department of traumato...