Gastro-intestinal ulcerative diseases are exacerbated in the spring - the National Center of Surgery offers the gold standard of treatment! 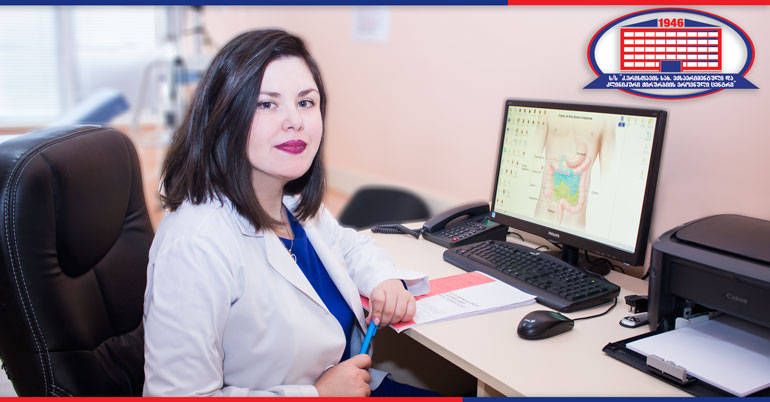 The gastrointestinal ulcerative disease is characterized by the erosive-ulcerative defects on the mucous membrane.

Mainly develops in the proximal (upper) part of the stomach and duodenum, rarely in the distal (lower) part of the esophagus and in the small intestine. The diameter of the ulcer is at least 5 mm, and in contrast to erosion, it is considered to be a deeper

lesion of the mucosa, which reaches the muscular level.
It is noteworthy that sometimes ulcerative diseases are characterized by periodic exacerbations, mainly in spring and autumn. As you know, the immune system is not adequately regulated in this season, for example, in the winter, the diet suffers from the deficiency of fruits and vegetables rich in vitamins, as well as allergic conditions, the virus, the infections have a negative impact on the immune system and gastrointestinal tract. The cause of exacerbation may also be not adequately treated ulcerative disease.

Because the disease is exacerbated according to a seasonal change, we decided to tell the reader about the gastrointestinal ulcerative disease.

Eka Zalikiani, a gastroenterologist at the National Center of Surgery is talking about this topic.

"The main symptom of the ulcerative disease is the pain that is different according to the location (in the stomach or duodenum) of the ulcer. Pain in the stomach ulcer is in the epigastrium (in the stomach area) which starts after the meal in 5-15 minutes and continues until the stomach content is emptied into the duodenum or vomiting. The duodenal ulcer is characterized by rhythmic-type pain, which occurs after receiving food or antacids (drugs lowering stomach acidity). Pain begins before breakfast or “hunger pain” or after 1.5 to 4 hours after eating, the night pain is typical. Pain radiates to the right upper quadrant of the abdomen. Dyspeptic events occur occasionally during ulcerative illness: heartburn, vomiting, nausea, and others.

- Is it often diagnosed in Georgia, and what is the average age of patients?
- In Georgia, the frequency of gastrointestinal diseases, including stomach and duodenal ulcer diseases, has always attracted an attention of specialists because the wrong lifestyle, unhealthy regimen and eating habits, along with other factors, contribute to the development of the disease. Recently an unpleasant trend is observed - the development of this pathology in the young age and childhood. About 5% of the population has a disease. The duodenal ulcer is more frequent than the stomach ulcer and may be found at a younger age. Men aged 20 to 50 are affected more often than women by this disease, but after menopause, the difference is reduced.

- How is diagnosis and treatment of this disease is conducted at the National Center of Surgery?
- The golden standard at our clinic, as well as around the world, is the endoscopic study, namely esophagogastroduodenoscopy (EGD), which can not only detect ulcers but also conduct a biopsy, determine PH (acidity), perform local treatment and evaluate the effect of treatment. The National Center of Surgery is equipped with the ultra-modern endoscopic machine OLYMPUS made by the Japanese company. The X-ray study is also quite informative - the ulcer looks like a deep crater. This mainly involves the big ulcers.

- What are the causes of ulcers?
- Until recently the ulcer was considered a multifactorial disease, which developed as a result of the decreased protective ability of the gastric mucous membranes and the effect of acid and enzyme pepsin on this basis. Nowadays, the main, crucial role in the development of the ulcer is played by Helicobacter pylori. Also, an ulcerative disease can be caused by non-steroidal anti-inflammatory drugs (NSAID), Antiplatelet drug, alcohol, tobacco consumption, unhealthy diet, and so on. 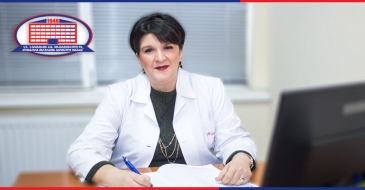 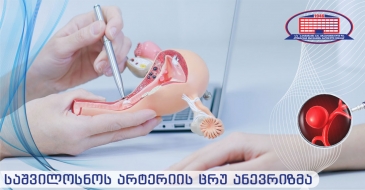 False aneurysm of the uterine artery 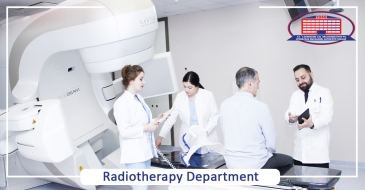