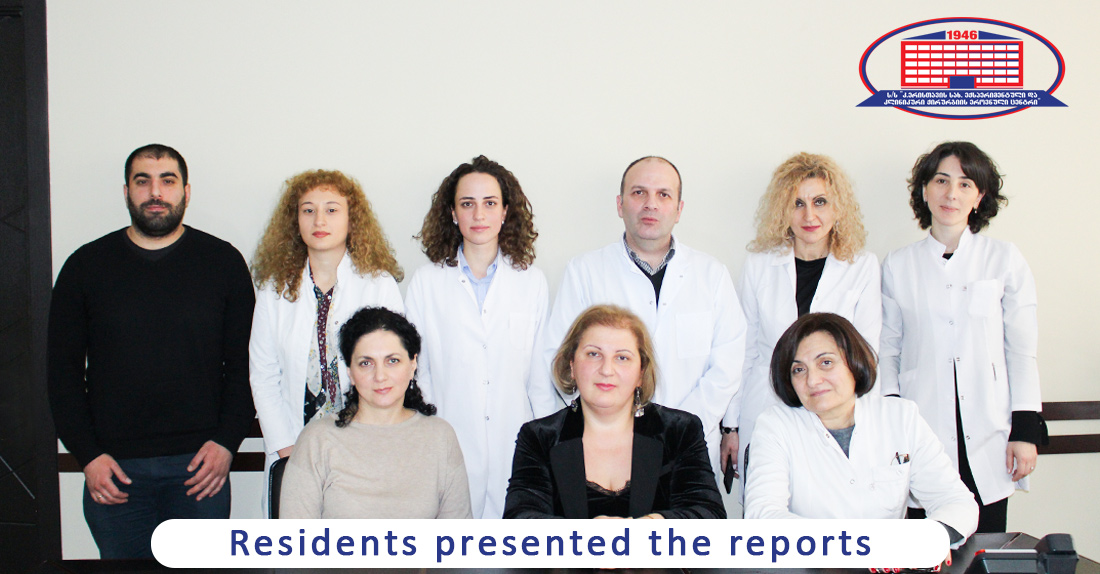 In the news, you will be informed about following:

The clinic’s residency services was created for medical education, professional training and its’ main purposes are:

Residents pass a theoretical course, as well as gain practical experience, medical skills in the clinic.

Residents present their work to the residency council every week.

Today, speakers were the future doctors who take residency courses in radiology, cardiology, and hematology.

The chairperson of the supervisory board of the clinic Tea Gamezardashvili and the coordinator of residency services Nana Nikolaishvili evaluated the papers.

Fibrous dysplasia is a non-neoplastic, slow, cancer-like congenital process and is characterized by the defect in osteoblast maturation and differentiation.

Mr. Giorgi discussed clinical forms of the disease and stated that the most common one is a monostotic form that occurs in 70-80% of cases.

For better visualization, he presented a classical x-ray image of chest fibrous dysplasia with damage to the dorsal part of the right 4th rib.

Mamuka Zeinklishvili takes a course of postgraduate medical education in radiology, whose presentation was dedicated to Kummell’s traumatic spondylitis;

Pathology was reviewed on the bases of the clinical case.

Kummell’s disease is a spinal pathology that manifests with sectoral deformation of one of the vertebrae and local pain. Aseptic necrosis most often occurs in thoracic vertebrae.

The disease progresses in 3 stages:

According to Mr. Mamuka, mainly, it’s a disease of young and middle-aged men that requires the collection of medical history and hardware study methods for diagnosing.

Lika Akhvlediani is a resident in the Department of Cardiology and she discussed H1N1 influenza.

As Ms. Lika stated, initially the newly manifested virus was called “swine influenza virus” due to its’ resemblance to a virus common among pig breeds in North America, albeit follow-up studies have shown “fourfold reassortment" of a new strain that implies the existence of the viral genes of swine, bird, and human in viral genome.

She explained the meaning of antigenic shift, who's under the risk-group of disease, what's the incubation period of influenza, what symptoms is it characterized by, how is it diagnosed and what methods are used for treatment. She discussed preventive measures and the importance of vaccination.

She presented 2009 disease statistics including incidence rate in Georgia to guests.

Influenza virus (H1N1) is a subtype of influenza A virus that became a source of infection in 2009 and is associated with the 1918 epidemic known as Spanish influenza in the medical society, influenza that caused the death of many people.

The resident discussed this epidemic as well and presented real photos depicting the threat that the world faced in 1918 and how the medical personnel protected themselves from the virus, why all large establishments became either an out-patient or in-patient facility.

The last speaker of the event was the resident in the Department of Hematology Ketevan Sibashvili and her presentation was dedicated to the most current medical issue – coronavirus.

The attention of the world media is directed towards the Chinese city Wuhan, which is the primary source of infection and a place where the first case of the virus occurred. Numerous photos and video materials were spread about the city under the quarantine.

Ms. Ketevan discussed the classification and symptoms of the virus.

The resident presented an x-ray image of a patient affected by a coronavirus, discussed diagnostics and preventive measures of the disease.

Chairperson of the supervisory board of the clinic thanked residents for the interesting reports. 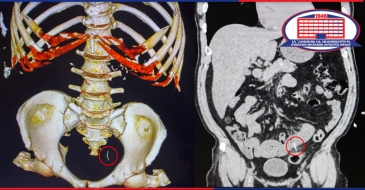 How did the wire get into the small intestine? - Doctors of the National Center of Surgery saved 59-year-old man from the peritonitis. 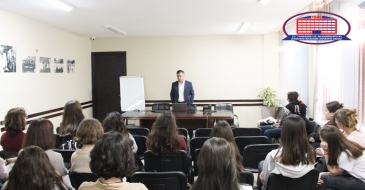