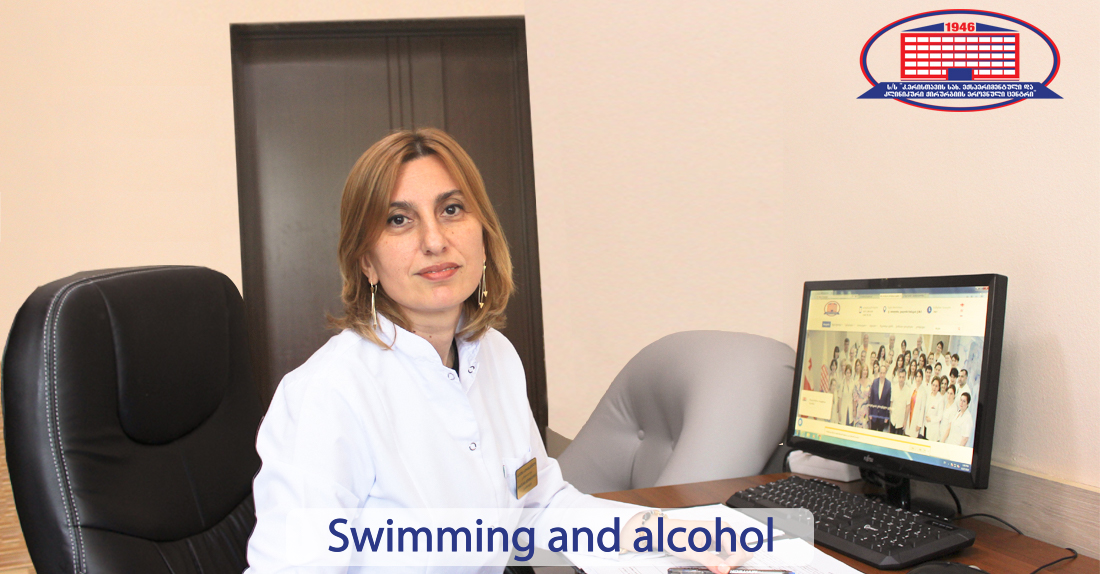 Despite the series of warnings from the lifeguards, some vacationers still drink alcohol at the coastline.

During alcoholic drunkenness, a person might make such life-threatening decision that s/he would never dare in a sober state.

Alcohol is a form of the depressant, because of which brain cannot properly process received information. Subsequently, an adequate reaction is deteriorated. Alcoholic drinks slacken the body, a drunken person has a false feeling of security, ability to properly perceive the distance and direction is disturbed.

This is a small list of changes that alcohol causes in the body and it’s completely enough to analyze what happens when a drunken person enters the sea!

Ms. Berinashvili states – “It’s inadmissible to swim in the swimming pool, river, lake or a sea in a drunken state!  Ability to think quickly is significantly deteriorated because of alcohol and a person cannot properly analyze the distance that needs to be covered until the coastline. Keep in mind the body temperature as well. As usual, initially, the water is relatively cool for every organism and thereby, the risk of hyperthermia (the decrease of person’s body temperature) development is great. It’s fully possible to weaken because of alcohol, to the point where you won’t be able to swim, will have trouble dealing with water because of cold muscle.”

– Ms. Berinashvili, in a society people often say that the person was drunk and the heart exploded. What does this phrase mean and what really happens to the heart during this time?

– Drowning is asphyxia (suffocation) developed in the lungs as a result of fluids getting in the respiratory tract. It's followed by brain function disorder, loss of consciousness, stop of breathing and heartbeat. Albeit, the cause of death when drowning in the water isn't always the respiratory tract's blocking. It's possible for the death to be caused by the stopped heart or hyperthermia that was the result of remaining in the water for too long. There are cases when the drowning is caused by the stop of breathing as a reflex out of fear.

According to the information of the representatives of Australia’s lifeguard organization - Royal Life Saving Society of Australia, annually 20% of the adults under the influence of the alcohol die in water.

I will explain once more – Drunken person isn’t properly aware of the threat. Body temperature rapidly changes because of alcohol and especially when the water is cool. Respiratory tract functions might be limited because of the spasms, water might directly get in the trachea that is followed by the stop of breathing and heartbeat.

– Besides swimming, generally in the drunk or hangover state, is it possible to take a hot or/and cold shower?

– It’s dangerous to swim and take a shower when you’re hungover. During this time an increase of the blood acidity and peripheral spasms of blood vessels take place, blood vessels are narrowed and a person needs a big amount of mineral water. In such conditions, physical activities, getting in the water, cold or hot shower aren't allowed. It might cause myocardial infarction, stroke.

Unfortunately, such cases are frequent and especially in men aged 35-50.

In case of any issues, you may contact National Center of Surgery’s cardiologist Khatuna Berinashvili for consultation at 577 64 33 49.

What happens to the organism during vitamin D deficiency, and how does sunlight help us?

How to lose and maintain weight and does eating at night actually cause weight gain?

What to do in case of ear pain and what causes inflammation of the ear?

We offer a consultation with a rheumatologist and laboratory tests