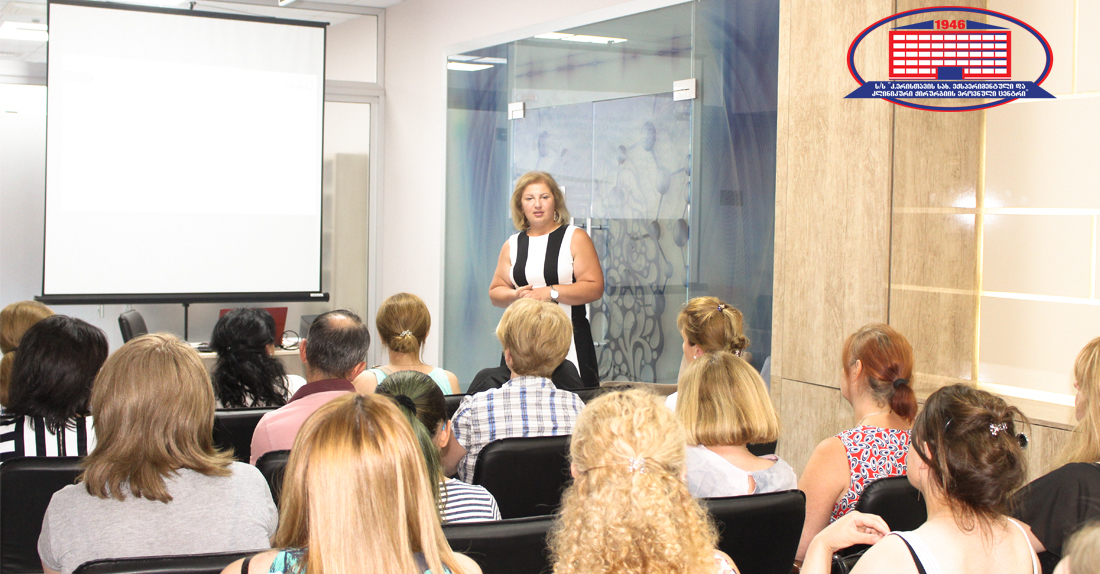 Representatives of the "Aversi” group's member-organizations periodically visit the radiotherapy department of National Center of Surgery.

Several weeks ago the clinic’s radiotherapy department introduced modern management principles of oncology to the employees of the insurance company "Alpha" and "Aversi clinic” and this time they’ve hosted pharmaceutical company “Aversi Pharma”.

National Center of Surgery's director-general Lasha Bazadze presented a photo-materials to the audience that clearly depicts how was the infrastructure changing in the department, how was the space for linear accelerators being built. In the gallery, you would see the process of ultramodern medical equipment allocation, shots from the visit of successful oncologists working abroad and etc.

Mr. Bazadze explained to the guests - what are the methods of treatment and diagnostic of oncologic patients and that based on the Tumor Board's joint discourse and discussion, treatment tactics are individually selected for each patient.

As Mr. Bazadze stated during the event, the clinic's linear accelerators are the latest generation, the year of 2019.

He explained that employees who work in the department were educated in the leading universities of the U.S and Europe.

Mr. Bazadze stated – “National Center of Surgery’s radiotherapy department ensures the patient-individualized, medical evidence-based, high standard radiation therapy performance using modern technologies. Radiation therapy impacts cancer locally to destroy cancer cells. It’s appointed to a patient in the radical (in order to be cured), neoadjuvant (for pre-operative preparation), adjuvant (as an assisting therapy in post-operative period) and palliative (for reducing the symptomatic caused by cancer and improving quality of life) regimes. Each personnel of National Center of Surgery's radiotherapy department is strictly guided by the international guidelines. So-called medical tourism is successfully conducted in the radiotherapy department.  For oncologic disease treatment, the clinic is visited not only by the Georgian citizens, but also by the foreign guests. Professor Natia Esiashvili, Emory University’s head of the quality unit of radiation oncology department and associate professor Maia Jughashvili – Hernandez, leading specialist at Spain Genesis Care’s multidisciplinary institution of oncology, member of public relations committee of ESTRO’s international radiation oncologists, associate professor of Murcia University, participate in treatment tactic and irradiation planning. I’m pleased to inform you that National Center of Surgery soon will be equipped with the very first digital positron-emission tomography (PET/CT) in Eastern Europe and the post-soviet union sphere.”

National Center of Surgery’s chairperson of the supervisory board Tea Gamezardashvili addressed the audience with her speech.

Ms. Gamezardashvili told the audience about the history of the clinic's establishment and introduced each personnel of the radiotherapy department.

Ms. Gamezardashvili stated - “The clinic was founded in 1946. Considering the long period and the experience, the clinic represents one of the main novators and in some cases, the medical service-founding medical establishments in Georgia. It's noteworthy that after the collapse of the Soviet Union the system started to crumble and also, events developed in the country negatively influenced the life of the institute. The unique infrastructure was practically demolished, extremely important scientific projects were stopped. Since 2011 the clinic was transferred to the company "Aversi”, which enabled the development of medical services in accordance with the quality of the international level. Multimillion Georgian investments were conducted in the clinic; ultramodern medical equipment that has no analog in the region was bought. The center was staffed with highly qualified medical and administrative personnel. In a multi-profile clinic, patients utilize all services 7 days a week, 24 hours a day. A number of extremely complicated operations were conducted in a hybrid operating room, thrombectomy was conducted for the first time in Georgia in the stroke center, the clinic also conducts thrombolysis. In the endovascular department, there's always a stent-graft supply necessary for thoracic and abdominal aortas, hence we serve urgent patients any time of the day and night. As you might know, the treatment of oncologic patients requires a multidisciplinary approach, sometimes only radiation therapy or chemotherapy isn't enough to help them. It requires the involvement of doctors from various profiles and that's exactly why the National Center of Surgery stands out. Particularly, the patient utilizes all necessary examinations and modern methods of treatment in one space"

The presentation for the guests was prepared by radiation oncologists of radiotherapy department, brachytherapists Irina Jobava and Lasha Goginashvili. During the presentation, oncologists reviewed several interesting clinical cases.

The clinical cases of onco-gynecologic, larynx, esophagus, rectum, skin cancer and methods of diagnostics and treatment were reviewed.

It should be noted that radiation therapy in modern oncology is one of the main treatment methods that is necessary to use for min. 50% of the diseased people on different stages of the fight against cancer.

The chemotherapy unit successfully functions at the radiotherapy department, where patients diseased with cancer are treated according to the latest international protocols and guidelines. Medication treatments for solid malignant cancers are conducted in the clinic's chemotherapy unit: chemotherapy, hormonotherapy, immune and targeted therapy in neoadjuvant, adjuvant and palliative regimes as a monotherapy, as well as polychemotherapy. Depending on the cancer type, stage of the disease and patient's general condition, treatment is conducted in an out-patient or hospital conditions. Treatment tactic is chosen individually using a multidisciplinary approach for each patient, meaning specialists from various fields take part in patient's diagnostics and treatment processes.

Since the establishment of the radiotherapy department in National Center of Surgery, many patients utilized high-quality medical assistance using qualified medical staff and ultramodern technologies.

Associate professor of the Murcia University visited the department of radiotherapy 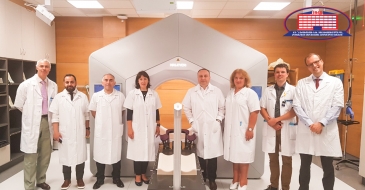