Neurosurgeons saved 82 years old stroke patient! Pathological blood vessel that only 3 people out of 1 million have

A combination of systemic thrombolysis and thrombectomy ended with a successful outcome at the National Center of Surgery.

It should be noted that this method of treatment of stroke in Georgia is innovative, and in combination, was first used at the National Center of Surgery.

It should be noted that last year the first successful thrombolysis throughout Georgia was performed at the National Center of Surgery.

Doctors of the clinic treated an 80-year-old patient. On admission, the patient had left-sided hemiplegia (paralysis of one half of the body), a speech problem, a severe left-sided deficit of the facial nerve, deviation of the eyeballs, and a neglect.

A scale (NIHSS) was used and on the basis of instrumental and laboratory studies, the thrombolytic therapy was indicated.

According to the protocol, the alteplase was started.

Along with thrombolysis, the patient also underwent thrombectomy with a complete recanalization, which improved the degree of neurological deficit.

We are glad to inform you that at this stage the patient’s state of health is stable.

Why did a combination of thrombolysis and thrombectomy become necessary?

When an occlusion of a blood vessel is identified by computed tomography with angiography or magnetic resonance imaging and the extent of the thrombotic masses is determined, the thrombectomy is considered. Thrombectomy is performed during occlusion of large-caliber vessels. However, sometimes for complete recanalization of blood vessels, thrombolytic therapy alone is not enough and a combined treatment is required. This was the situation in this clinical case.

According to the latest data, in every 2 seconds, one person in the world experiences a stroke, and a person dies in every 5 seconds because of this pathology.

Immediate help is very important during the stroke. The stroke center of the National Center of Surgery has unique abilities. It is equipped with modern machines, staffed by experienced, professional neurosurgeons and neurologists.

The Stroke Center offers you the modern approaches to the treatment of the stroke, which are implemented in the best clinics of America and Europe.

New biplane angiograph Trinias B12 laid the foundation of the Stroke Center development. This equipment is the only one in the region and allows us to do unique operations. It is the latest technology that was sold outside Japan for the first time.

Once the patient is admitted to the stroke center, the team of professionals determines the type and genesis of stroke. For the treatment of ischemic stroke, according to the modern guidelines, systemic intravenous thrombolysis or endovascular thrombectomy is performed. The method is chosen individually according to the condition of the patient and the indication.

Thrombolysis is the breakdown of thrombus. This kind of therapy is aimed at restoring blood flow in the damaged area of the brain using the recanalization method, which restores the blood flow to the brain, as a result of which the existing symptoms of a stroke completely or partially disappear. A tissue plasminogen activator called Activase (alteplase) is used, which can break down the thrombus during the first 4,5 hours after stroke, after that time it loses the effect, so for the patient it is essential to reach the stroke center as soon as possible, the sooner thrombolysis begins, the better the chance for a good outcome

Endovascular thrombectomy is a minimally invasive intervention. From the femoral artery, the doctors remove the thrombus from the carotid arteries, which occludes the specific vessel. After that the blood flow completely restores.

From the thoracic artery to the thrombosis of the carotid basin, the particular blood vessel is blocked. The blood circulation will then be fully restored, this method is successful within the first 24 hours after the stroke, but a golden period is 6-8 hours. The procedure is carried out by the biplane angiograph SHIMADZU - Trinias B12, using the Penumbra system, which is accepted worldwide.

This is an intravascular manipulation, which allows the surgeon to take the thrombus out of the blood vessel. The operation lasts for about half an hour, after which the patient is discharged from the hospital only 3-4 days after the surgery. The thrombectomy becomes necessary if the patient develops acute ischemic stroke, which is caused by the thrombus blocking the lumen of the blood vessel, which impairs the blood flow to the brain, which is why the stroke develops. In this case, the surgeons remove the thrombotic masses, clear the vessel. This is a minimally invasive intervention, which requires regional anesthesia. This intervention is carried out through a small puncture in the femoral area. The operation is performed under the control of the angiography.

Each employee of the Stroke Center of the National Center of Surgery, a team of neurologists and neurosurgeons who, within 24 hours, take care of your health and are ready to serve this great purpose, to manage one major problem in the field of medicine - a stroke.

The address of the National Center of Surgery: Dighomi, N5Chachava Str, Tbilisi, Georgia. 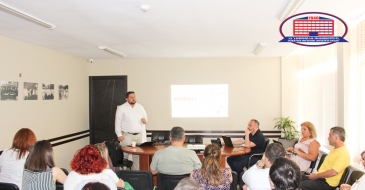 Why must stroke patients be treated only in a clinic with a stroke center?